In the summer of 1998, seven college students decide to take a graduation road trip from the Atlantic coast of Florida to the Pacific coast of California. On their trip down I-10, the true personalities of each one will begin to reveal themselves. After a wild night of partying in New Orleans, they awake in a hotel room to find that one of their fellow travelers has been murdered. From that moment on, a series of hasty decisions will lead them through the hellish landscape of a desert, through infernal guilt and silence, until an unexpected solution is found. A mirage of a solution, like all the rest. Tequila is more than a road-trip adventure. Rather, the novel explores the stripping off of the masks all of us wear within as civilized individuals, and the invention of other substitutes as selfish means of survival. 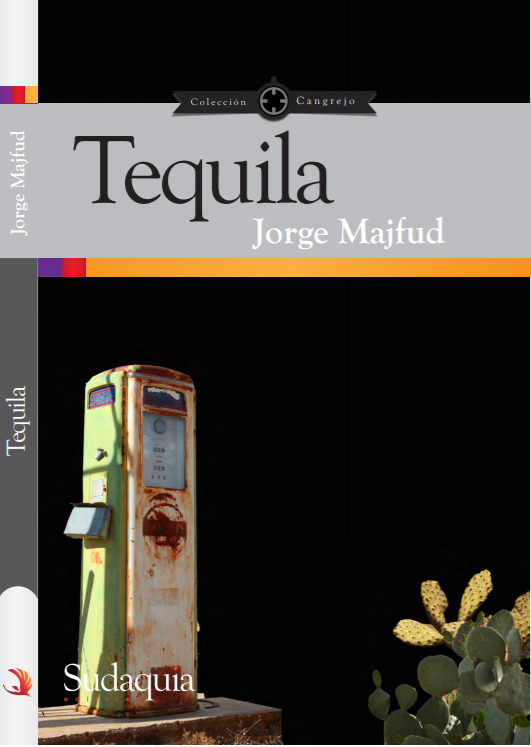 The narrator finds out, from the news, of the murder of a choreographer in Los Angeles called Guzman, whom she knows as German. She knows that the murderer is Roque, who has persecuted her for years like a Bushman hunter.

Roque is one of seven college students of a graduate trip made fifteen years ago on Interstate 10 from the Atlantic coast of Florida to the Pacific coast of California, which was marked by an oath and a tragedy. Shortly before leaving Florida they had problems with Roque. After a dispute Roque had sex in the RV underway with one of the members who had most resisted him. Because of his growing aggressiveness, particularly towards the gay member of the group (Guzman), he was forced to leave the group and swore revenge, but he had to get off in Mobile, Alabama.

In New Orleans, after a night of tequila and marijuana, the rest of the group woke up to the sound of gunshots in one of the rooms of a motel. They discovered one of the fellow travelers, Guzman, dead in a bed and dressed as a woman.

The group left the Louisiana motel without knowing who could have done it due to the intoxication of the previous night. They took Guzman (the dead man) for the rest of the journey, dressed and kept in frequent tequila baths.

In El Paso, Texas, they contacted a Mexican immigrant, German, to help them contact a «coyote» to make German disappear on the other side of the border. But the plan did not work, and they continued their journey, this time with German.

After several days of traveling west they discovered that German shaved was Guzman’s double. They attributed it to the similarity that all those belonging to other ethnic groups had, but speculations began to take advantage of the fact.

Like someone who receives an organ to start a new life, German decided to adopt the identity of Guzman (who was finally buried in Arizona after getting lost in the desert) and made his life in the film industry in Los Angeles, like Guzman wanted to have done.

But the narrator knows that Roque killed Guzman twice – in 1998 and in 2013 – and that he would continue to harass her. She has a plan to kill Roque, which includes his suicide.

“In this novel, the exaltation of youth is turned into a tragedy, and haunts a woman for many years. Majfud’s classic prose takes us on a journey through images and passions that succeed in tying together the Latin American spirit with the hidden dangers on the southern border of the United States. It’s most definitely a moving novel that will leave you hypnotized.”

“A narrator determined to confront a violent past entraps us in her memories. Once more, Jorge Majfud shares his keen perspective on a society sickened by the excesses of modernity.

“Tequila is an arresting novel where adventure, delight and life on the road are united with the ethical sense and psychological exploration which characterize the works of Jorge Majfud. This time, the Uruguayan writer goes well beyond the borders he had already crossed in his previous novels to bring us a linear story that nonetheless features several interrelated narratives. What Tequila gets most right is its narration, which becomes obsessive, with subtlety and precision employed in the construction of each character and the plot itself. In short, a Majfudian novel…

“Majfud makes the reader uncomfortable with his nonconformist prose and a thoroughly unconventional dissection of the North American reality. While the excellent novel Crisis (2012) features largely unknown experiences of Latin American immigrants in the United States, in Tequila, news of a murder in Los Angeles triggers the memory of a solemn oath and a tragedy that returns from the past to haunt the narrator, who describes in detail a long-hidden secret that explains the final outcome.”