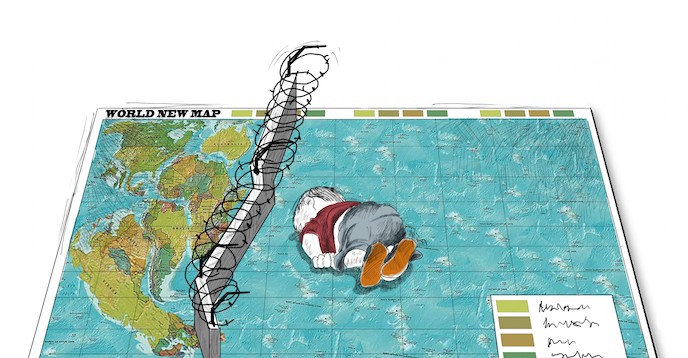 The debate on what we call a “migration crisis” has a racial component. It is a pattern which consistently repeats itself in different laws, narratives, and practices, like it has done over centuries, according to Uruguayan-American writer Jorge Majfud. Taking us on an instructive detour through history, he points out the total absence, in this same heated debate, of any mention of half a million European immigrants who live illegally in the United States and another million Americans living illegally in Mexico.

In my classes, I always try to make clear the difference between opinions and facts. It is a fundamental rule, a very simple intellectual exercise that we owe ourselves to undertake in the post-Enlightenment era. I started becoming obsessed with such obvious matters when I found out, in 2005, that some students were arguing that something “is true because I believe it” – and they weren’t joking. Since then, I’ve suspected that such intellectual conditioning, such a conflation of physics with metaphysics (cleared up by Averroes almost a thousand years ago) – which year by year becomes increasingly dominant (faith as the supreme criterion, regardless of all evidence to the contrary) – has its origins in the majestic churches of the southern United States.

But critical thinking involves so much more than just distinguishing facts from opinions. Trying to define what a fact is would suffice. The very idea of objectivity itself paradoxically originates from a single perspective, from one lens. And anyone knows that with the lens of one photographic or video camera, only one part of reality is captured, which quite often is subjective or used to distort reality in the supposed interest of objectivity.

For some reason, students tend to be more interested in opinions than facts. Maybe because of the superstitious idea that an informed opinion is derived from the synthesis of thousands of facts. This is a dangerous idea, but we can’t run away from our responsibility to give our opinion when it’s required. All that we can and should do is take note that an informed opinion continues to be an opinion which must be tested or challenged.

On a certain day, students discussed the caravan of 5,000 Central Americans (at least one thousand of whom were children) fleeing violence and heading for the Mexican border with the US. President Donald Trump had ordered the border closed and called those looking for refuge “invaders”. On 29 October 2018, he tweeted: “This is an invasion of our Country and our Military is waiting for you!”. The military deployment to the border alone cost the US about $200 million.

Since one of my students insisted on knowing my opinion, I started off with the most controversial side of the issue. I observed that this country, the US, was founded upon the fear of invasion, and only a select few have always known how to exploit this weakness, with tragic consequences. Maybe this paranoia came about with the English invasion of 1812, but if history tells us anything, it’s that the US  has practically never suffered an invasion of its territory – if we exclude the 9/11 attacks in 2001; the one on Pearl Harbor, which at the time was a military base in foreign territory; and, prior to that, at the very beginning of the twentieth century, the brief incursion of a Mexican named Pancho Villa mounted upon a horse. But the US has indeed specialized in invading other countries from the time of its founding – it took over the Indian territories, then half of Mexico, from Texas, to reinstall slavery, to California; it intervened directly in Latin American affairs, to repress popular protests and support bloody dictatorships – all in the name of defence and security. And always with tragic consequences.

Therefore, the idea that a few thousand poor people on foot are going to invade the most powerful country in the world is simply a joke in poor taste. And it’s likewise in bad taste for some Mexicans on the other side to adopt this same xenophobic talk that’s been directed at them – inflicting on others the same abuse they’ve suffered.

In the course of the conversation, I mentioned in passing that in addition to the foundational paranoia, there was a racial component to the argument.

“You don’t need to be a racist to defend the borders,” said one student.

True, I noted. You don’t need to be a racist to defend borders or laws. At first glance, the statement is irrefutable. However, if we take history and the wider current context into consideration, an openly racist pattern jumps out at us right away.

At the end of the nineteenth century, the French novelist Anatole France wrote: “The law, in its majestic equality, forbids rich and poor alike to sleep under bridges, to beg in the streets, and to steal their bread.” You don’t need to be an elitist to support an economically stratified culture. You don’t need to be sexist to spread the most rampant type of sexism. Thoughtlessly engaging in certain cultural practices and voicing your support for some law or another is quite often all it takes.

I drew a geometric figure on the board and asked students what they saw there. Everyone said they saw a cube or a box. The most creative variations didn’t depart from the idea of tri-dimensionality, when in reality what I drew was nothing more than three rhombuses forming a hexagon. Some tribes in Australia don’t see that same image in 3D but rather in 2D. We see what we think and that’s what we call objectivity.

When President Abraham Lincoln emerged victorious from the American Civil War (1861-1865), he put an end to a hundred-year dictatorship that, up to this day, everyone calls “democracy.” By the eighteenth century, black slaves had come to make up more than fifty percent of the population in states like South Carolina – but they weren’t even citizens of the US, nor did they enjoy even minimal human rights.

Many years before Lincoln, both racists and anti-racists proposed a solution to the “negro problem” by sending them “back” to Haiti or Africa, where many of them ended up founding the nation of Liberia (one of my students, Adja, is from a family which comes from that African country). The English did the same thing to “rid” England of its blacks. But under Lincoln blacks became citizens, and one way to reduce them down to a minority was not only by making it difficult for them to vote (such as by imposing a poll tax) but also by opening the nation’s borders to immigration.

The Statue of Liberty, a gift from the French people to the American people to commemorate the centenary of the 1776 Declaration of Independence, still cries with silent lips: “Give me your tired, your poor, your huddled masses yearning to breathe free…” In this way, the US opened its arms to waves of impoverished immigrants. Of course, the overwhelming majority were poor whites. Many were opposed to the Italians and the Irish because they were red-headed Catholics. But in any case, they were seen as being better than blacks. Blacks weren’t able to immigrate from Africa, not just because they were much farther away than Europeans were, but also because they were much poorer, and there were hardly any shipping routes to connect them to New York. The Chinese had more opportunities to reach the west coast, and perhaps for that reason a law was passed in 1882 that prohibited them from coming in just for being Chinese.

I understand that this was a subtle and powerful way to reshape demographics, which is to say the political, social and racial make-up of the US. The current nervousness about a change to that make-up is nothing more than the continuation of that same old logic. Were that not the case, what could be wrong with being part of a minority group or being different from others?

You don’t need to be a racist…

Clearly, if you’re a good person and you’re in favour of properly enforcing laws, it doesn’t make you a racist. You don’t need to be racist when the law and the culture already are. In the US, nobody protests Canadian or European immigrants. The same is true in Europe and even in the Southern Cone of South America [the southernmost region of Latin America, populated mainly by descendants of Europeans]. But everyone is worried about the blacks and the hybrid, mixed-race people from the south. Because they’re not white and “good”, but poor and “bad”. Currently, almost half a million European immigrants are living illegally in the United States. Nobody talks about them, just like nobody talks about how one million United States citizens are living in Mexico, many illegally.

With communism discarded as an excuse (none of those chronically failing states where migrants come from are communist), let’s once again consider the racial and cultural excuses common to the century prior to the Cold War. Every dark-skinned worker is seen as a criminal, not an opportunity for mutual development. The immigration laws are themselves filled with panic at the sight of poor workers.

A safer, more dignified journey for all migrants, tops agenda at global conference in Marrakech(link is external)

U.S. Coalition of Cities against Racism and Discrimination

Professor of Latin American Literature and International Studies at Jacksonville University in Florida, in the United States, Jorge Majfud is a renowned Uruguayan American writer, who regularly contributes to the international media. He is the author of many novels including The Queen of America, Crisis and Tequila, and books of essays such as A Theory of Semantic Fields.